The webinar will provide a platform for dialogue on issues related to women in society.

In one of the largest demonstrations staged in this country’s history, 20 000 women of all races marched to Pretoria’s Union Buildings on 9 August 1956, to present a petition against the carrying of passes by women to the prime minister, JG Strijdom. The march against the pass laws was organized by the Federation of South African Women (FSAW or FEDSAW). The Federation famously challenged the idea that ”a woman’s place is in the kitchen”, declaring it instead to be ‘everywhere’. Although Prime Minister J.G. Strijdom was not at the Union Buildings to accept the petition, the women of South Africa sent a public message that they would not be intimidated and silenced by unjust laws. The first National Women’s Day was celebrated in 1995. South Africa had just become a democratic country at the time, and the day was declared a national holiday. Since then annual celebrations take place throughout the country. It has become one of the national holidays where activities are organized with women in prominent positions making appearances and giving speeches at different venues across the country. August has since been declared National Women’s Month.

The theme will center on the popular Zulu phrase which became a popular freedom song “e’wathint’ abafazi, wathint’ imbokodo” (You Strike a Woman, You Strike a Rock). This has come to represent the courage and strength of South African women.

The webinar will also be an extension of the 2020 theme that has been proclaimed by the South African Government viz.

Women’s Month is a platform from which government and civil society are able to highlight the challenges confronting women and profile programs and policies that advance women’s empowerment and gender equity.

This year Women’s Month objectives are to advance efforts to end gender discrimination and advance the rights of women and girls in the political, economic, social and cultural spheres of life, and mobilize women and strengthen organized formations towards the development of sustainable Action Coalitions.

The Month also aims to advance efforts to develop national consensus around a program of gender policy priorities and programming to advance the gender agenda in the period 2020-2025, and towards the achievement of gender equality in South Africa by 2030.

Women’s Month 2020 is also directed towards giving impetus to the accelerated implementation of programs for women, youth and persons with disabilities.

Furthermore, government and civil society are working together to address national priorities including the eradication of gender-based violence, expanding youth employment and ensuring reasonable accommodation for persons with disabilities.

Based on the above Capitol Radio will be hosting a special webinar during the weekly program, Ubuntu Radio with Dr G on Wednesday 12 August 2020 from 19h00 to 20h00.

Four prominent women have been invited to participate in the webinar viz.

The webinar will be moderated by Dr Rajendran Govender, the host of Ubuntu Radio with Dr G and assisted by Busi Zondi thw co-presenter.

The webinar will be flighted on the online radio platform of Capitol Radio, Facebook Live, YouTube and Zoom.

An invitation is extended to THI to be a partner in this important venture given the important role the organization is playing in dialogue in South Africa.

The expectations from the THI are as follows: 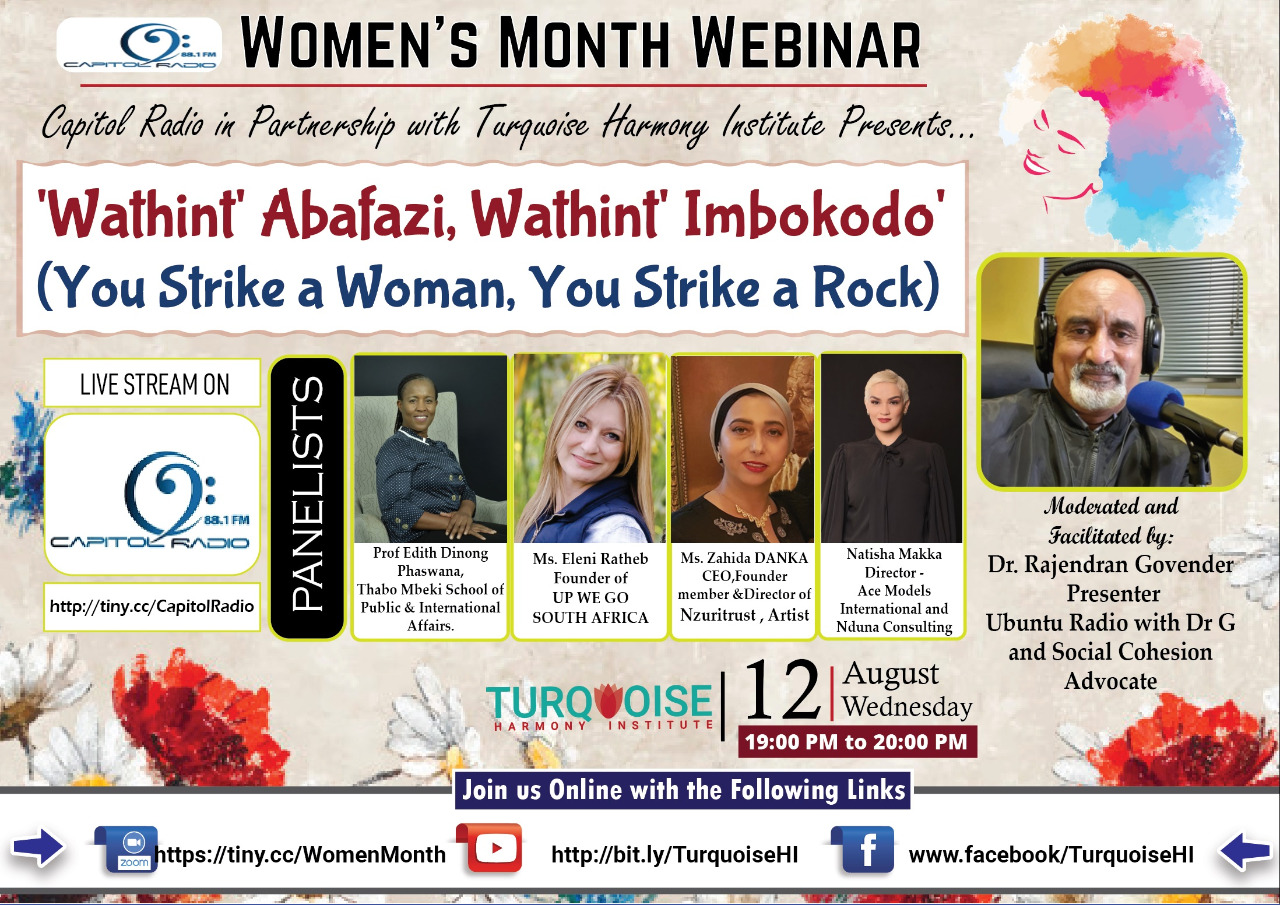